In the beginning, there was a light and unto the people came the T1 and they ripped. And then, oh yea, another light didst shine and the T2 issued forth and then the people toured far and wide and slept in huts and were happy. Yet still there was a gathering in the village and many were there that waffled back and forth and made uneasy the beasts of the field, for they were ones that wanted both to shred the sickness and float like a leaf upon the backcountry's bounty and there was much snivelling and gnashing of teeth and quaffing of the lattes of despair, and much troubled by the hubbub were the designers at Scarpa and so long into the night didst they labor with blueprints and slide rulers and boot making thingies until, lo, the dawn came waddling and the moaners and the gnashers fell silent and the beasts of the field felt appreciably safer, and the designers did stand and stretch and hold up to the rising sun that which came to be known as the T2X. And it was good, my friends. It was very good indeed.

Once the men's lamentations had changed to shouts of joy, the Scarpa designers fashioned more T2Xs, but these they made a pretty shade of blue with a narrow last so that the Alpine Betties did take to them and use them with great skill and, lo, the Scarpa designers became flustered as brilliant minds often do, and they stuttered awkwardly unto the Betties, offering them private midnight viewings of boot design etchings yet it was not to be for there were freshies in the high country and the Betties skinned away and the designers' hearts were crushed as if by avalanche and that is the way it has always been and the way it shall always be.

Skip to the end of the images gallery 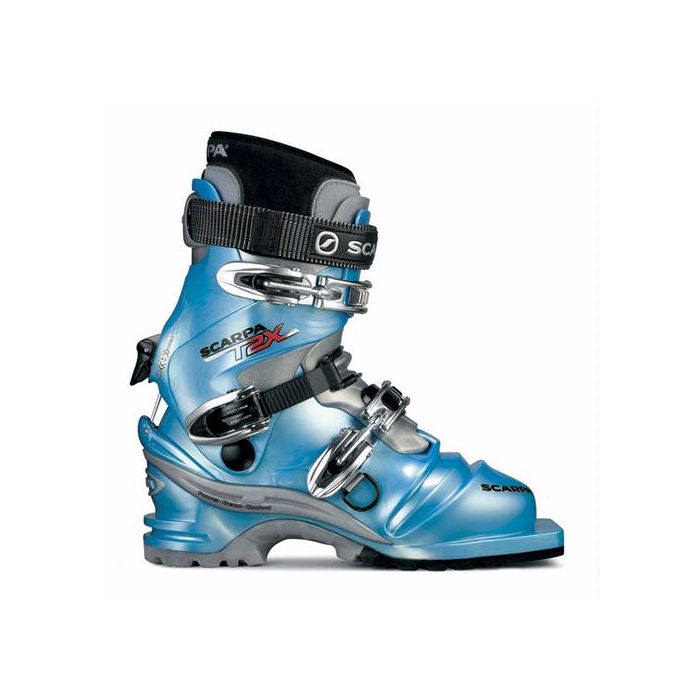